Mougins in the Alpes Maritimes: history

The territory of Mougins has delivered traces of occupation old.
According to a local tradition, Mougins allegedly a refueling point on Via Julia Augusta (linking the Italy to the Spain through Provence) during the period of the Roman Empire. However, current studies show that the route of this track followed the coastline roughly at the level of national 7.
A burial cave in the Breguieres.
Traces of the most ancient occupation discovered the territory seem to go back to the Neolithic period final or CHALCOLITHIC and come from the cave or the Breguieres aven. This last excavated in the 1970s by Maurice Sechter, the Cannes region amateur archaeologist, has, to date, never been studied properly. She delivered the remains of a quarantine of individuals associated with lithic furniture and ceramics.
The old village, perched on a hill, was founded in the middle ages.
In the 11th century, Antibes County donna Mougins (name of time: Muginis1) to the Abbey of Lérins, who kept it until the French Revolution.
In the middle ages, it became a town fortified, with late during the reign of King René, sovereign of Provence, a Charter of franchises, the Abbot of Lérins, and Bishop of Grasse being Lords. The protection of its Hill and its walls helped Mougins less suffering than many other villages, local wars and conflicts of the 16th century.
An important element of this historical period has recently openly by the official services of the INRAP of the Ministry of Culture venus "probe" field provided to implement a commercial surface.
Surveys intended to identify remains from the Roman era has, however, not yet been made. Some people believe that the town of Mougins bears so little interest on this page in its history and nowhere refers to this Currault bastide. After several reflections, a backup of the heart of the frame would be considered... An association is created in March 2008 to defend the safeguarding and development of the Bastide.
Mougins during modern times.
During the war of succession of Austria, the village was devastated by a fire and plundered by austro-sardes armies.
In 1747, austro-sardes troops occupying Mougins are hunted by the Maréchal de Belle-Isle and the chapel Saint Bernardin serves as hospital in the Régiment Royal-Comtois. The following year, it is transformed into store to forage for the refuelling of the cavalry from Marshal of Belle Isle, causing massive damage to the building and its furnishings.
From June 22, 1854, a part of the territory (400 hectares) of Mougins is attached to the Cannet9.C' is from the half of the 20th century that this locality became one of the tourist and artistic of the Côte d'Azur.The village of Mougins has twenty galleries and workshops of painting, great restaurants, not to mention the old city and fountains.
A few Roman remains found in the area of the Redon.
Provencal village formerly fortified, perched on a Knoll; plan radio-circular homogeneous; old houses, narrow streets sloped, place shaded with large fountain end 19th century washhouse, bust of Commander Lamy on a plot.
Remains of fortifications: defensive door 15th century with machicolation, vestiges of ramparts.
Round 18th century with 19th-century campanile.
Mill of the cross.
Many residences around.

Gastronomy
Mougins has more than 40 restaurants, including the famous Moulin de Mougins Restaurant Candille. In addition to these prestigious tables, tables of high quality propose gastronomic, traditional cuisine, or Provençal.
The village also owes its gastronomic reputation at the international Festival of gastronomy are organized each year in September.

Mougins is classified in 2011, city and business of Art17.

Mougins (Provençal Occitan: Mougins in classical norm or in mistralian norm Menon), (Latin: Muginis1) is a commune in the Alpes-Maritimes Department in southeastern France.
The Provençal town of Mougins welcomes many of the villas of billionaires, stars of showbiz etc. The village of Mougins has art galleries, great restaurants and the old stone houses.
Its inhabitants are called the Mouginois / Mouginoises. The town of Mougins is part of the technopole of Sophia Antipolis (make Elm).
The city has the nickname of "Garden-City" because of its many houses and the urban policy who prefers houses for social housing.
The name of Mougins, of the mug Celtic meaning 'stone', 'butte', unless you prefer to see the influence of the mg, variety of pines Pinus, which just grows on stony soils. The old village resembles a staircase.

Mougins is located approximately 6 kilometres from the Mediterranean Sea, North of the towns of Cannes and le Cannet and South of Grasse.
The town is bisected by the N85 national road between Cannes and Grasse in Grenoble (also known as route Napoléon).
It is one of 5 creative cities of Sophia-Antipolis Valbonne, Biot, Antibes, Vallauris and is host to 18% of the Sophia-Antipolis technopole.
Grasse, Antibes and Nice cities are close to Mougins.

The village is just 30 minutes from Nice Côte d'Azur Airport, less than 15 minutes from Cannes SNCF train station and 3 minutes from that of Mouans-Sartoux
Can also be accessed in Mougins by the A8 motorway, exit No. 42, exchanger Cannes-Mougins.

On the roundabout of the release located at the interchange of the motorway A8 (the Provence) of Mougins, lies a statue of the famous V for victory of Winston Churchill, surrounded by french flags, Americans and English. On the statue, the name of three politicians representing the Allies during the second world war is registered. Namely, De Gaulle, Churchill and Roosevelt.
(Source Wikipedia)

Name of the page: Mougins
(Part of the content of the page slightly modified).
Credit to insert:
Content subject to CC-BY-SA 3.0 license. Source: Wikipedia article Mougins in French (authors) 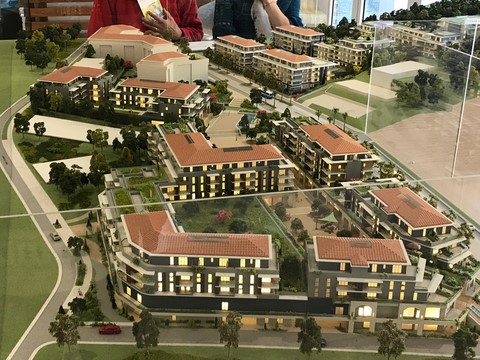